Services at 10:30am Sundays

Rev. Andrée Cornelia Mol (pronouns: she/they) joined Central Unitarian Church as its Minister in August 2019.  Rev. Andrée’s ministry centers around community and spiritual development. She works to nurture community relationships, to widen our circle of belonging, and to bring forth more love and goodness into the world.  As a minister, she uses words, music, stories and space to create collaborative, transformational experiences.

Rev. Andrée is a religious naturalist who holds interconnection and wholeness as sacred. She draws heavily on her contemplative practices and her identity as a queer and trans individual. She believes that nurturing community includes exploring and honoring both our individual and collective theologies – the sources we share in common and those that are radically different.

Rev. Andrée grew up in California and New Jersey and as a college undergraduate, studied film production, then “accidentally” fell into a 20-year career in Human Resources for a global bank where they focused on leadership and organizational development. After living and working in New York City, Rev. Andrée moved to Vermont in 2009, and –drawn by a call to Unitarian Universalist ministry – began seminary at Meadville Lombard Theological School.  Rev. Andrée was ordained by the First Unitarian Universalist Society of Burlington, Vermont where she previously served as the Developmental Assistant Minister for Pastoral Care and Membership before coming to Paramus.  She can be reached at revandree@cucparamus.org.

Alie Christopher is Acting Director of Family Faith Formation. She was born in Naples, Italy. She grew up in Central Florida and received her B.A. in English and Education with a minor in Mass Communication from the University of Central Florida. She recently moved to New Jersey with her husband, son, mom, and dad.  They are starting from scratch to create a better life for her son. She was raised Unitarian and the core principals of the church guide her every day to be the best person she can be. She now looks forward to raising her son in the Unitarian church. She loves meeting new people and helping others. She has had many years of experience working with people of all ages and from all different backgrounds. She was an elementary school teacher, retail manager and bartender over the years. These jobs have made her patient, kind, quick on her feet and an excellent multitasker. She believes that together as a congregation we can make great things happen.  She can be reached at achristopher@cucparamus.org.

Matt Anderson has been Director of Music at Central Unitarian Church since 2008.  He holds degrees from Temple University (B.M.) and the University of Cincinnati (M.M.).  Matt is a professional musician, educator and composer.  To hear original music Matt has written for services at Central Unitarian Church visit his YouTube channel at Matt Anderson Original Music.  He can be reached at manderson@cucparamus.org. 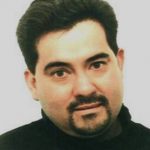 Robert René Galván is a conductor and educator with a long list of credits and associations from all over North America, ranging from small churches to the highest echelons of music. He is equally at home in orchestral, choral, operatic repertoire and musical theater, and is known for his extraordinary professionalism, precise communication and directing skills. In addition to Central Unitarian Church, Maestro Galván is Conductor of the Bronx Concert Singers, Peace of Heart Choir and Manhattan Sinfonia in New York City. He currently serves as Professor of Conducting at the Long Island Conservatory of Music. He was also Music Director of Highbridge Voices Youth Chorus, and Professor of Conducting & Choral Studies at the Brooklyn-Queens Conservatory of Music where he trained young conductors and directed the conservatory chorale. He was guest conductor of Florilegium Chamber Choir in Manhattan and Cappella Festiva in upstate New York. For four seasons he was conductor of the Springfield Symphony Chorus in Massachusetts. In Texas, Galván held positions as conductor of the Austin Philharmonic, Associate Conductor of the Austin Choral Union, and as director of both the University Chorus and the Longhorn Singers at the University of Texas. He is married to the playwright Holly Hepp and has a daughter, Gina.  He can be reached at rgalvan@cucparamus.org.